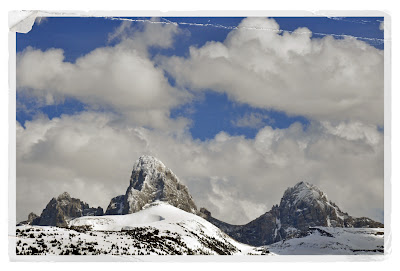 I couldn't think for any Grander Peak than my very own Grand Tetons that are right in my backyard, well give or take 50 miles. I have, when I was younger much younger climbed 2/3 of the way up the Grand, around Mt. Owen and all over Table Mountain (which is a favorite hiking spot from the Idaho side). Picture was taken Saturday, March 21st on a trip to Grand Targhee Ski Resort on the Idaho Side. There are more pictures taken of the Grand Tetons from the Idaho side that the Wyoming side due to the fact that the Idaho side is more photogenic.

The Grand Teton is the highest mountain within , and at 13,770 feet (4197 m), the second highest in the state of . The origin of the name is controversial. The most common explanation is that "" means "large teat" in French, named by either French-Canadian or Iroquois members of an expedition led by Donald McKenzie of the North West Company. However, other historians disagree, and claim that the mountain was named after the Teton Sioux tribe of Native Americans.

Link for the Teton Cam is right HERE if you want to see it in real time but bear in mind that the weather is always changing here in Idaho so you could be seeing just snowy, cloudy or stormy weather on the mountain. I LOVE these Peaks Ü

Email ThisBlogThis!Share to TwitterShare to FacebookShare to Pinterest
Labels: challenge, Out West, outdoors

I want those in my backyard, wish you could share! Stunning!

Just breathtaking - how lucky you are to have that in your backyard. The live Teton-Cam is really cool too (looked snowy or cloudy when I checked in)

That is a fantastic shot and the story and history add to it well! I was tempted to go to your link but I don't have time to sit and watch mountains, walking around making a nuisance of themselves, they are so slow! Great Post.

And I echo Julie! Love the link too.

Breathtaking is right. You captured the mountains beautifully. The peaks and valleys are gorgeous.