How did that get here? 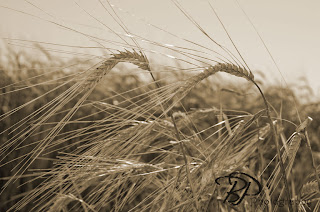 Have you ever stopped to think, "Just where does all the food come from that we have in the grocery store?"
Before I get into that, I just want to say that we really are blessed here in the states. So blessed in fact that our Government even pay some farmers NOT TO GROW any crops just so the prices can keep stable and we don't over produce.
Now back to "WHERE ALL THAT FOOD" comes from.
What would happen if the farmers, producers or truckers decided that they were going to go on strike for higher wages, better working conditions or they decided they needed to fomr a union to get these benefits? Would you be able to feed your family tonight?
My husband met a woman just this past month that told him, "go ahead and let the farmers strike, I can get what ever I need at the grocery store." Gosh what was she thinking?
Or how about this one, a woman's objection to the way milk cows were handled. She thought this was inhuman and wanted her local dairy to discontinue milking. When asked where she would get her milk, she said "She would just purchase it at the local store just like anyone else".
So where am I going with this, what's your point, you ask?
I know and appreciate that when I need a gallon of milk I can go to the local grocer and get it just like the next guy, thanks to the early morning milkers that made sure that it got there. The farmer that raised the grain so that I could have my cereal. The trucker that runs long and sometimes stressful hours to get the product to the store. Last but not least, my husband that works so hard so that I can afford to put it all on the table.
Thank to this great country, I don't think I will go hungry anytime soon.
at Thursday, August 20, 2009

I'm right there with you! What a beautiful image to illustrate your point, the toning is perfect!

Nice perspective on the picture and the topic. We do take things for granted sometimes, don't we.

Lovely photo. My daughter just read ANIMAL, VEGETABLE, MIRACLE by Barbara Kingsolver and it sounds like something you might enjoy. (school requirement for her - but I am going to read it as well).

In my life, I have been part of that process. I've been a farm laborer (my parents were my bosses), I've been the trucker and the trucker's wife. So I know what it takes to put the food in the store and then onto your table. Those people who are so uninformed to think they could just always go to the store to purchase their needs are living in La La land. Just like the woman who thought Obama's new government was going to make her house payments and put gas in her vehicle. They need to wake up and smell the coffee.

Really, really like this photo and what it represents. Very thoughtful.